Not every space is capable of having a traditional door unit due to the size of the room. For example, a closet may have doors that fold while a bathroom might have a door that slides into the wall. Knowing the available options helps in choosing the best unit for the space in which it will be used. A swinging unit is the most popular type in homes today. The unit incldues the door attached to a jamb system by hinges on one side. The hinges allow the door to swing open and close. It will be kept closed by either a doorknob or a catch. While the components can be sent separate, or as a knocked down unit, this type of unit is typically pre-hung and ready to be installed. A bifold unit uses several narrow doors joined together with hinges. Hangars are attached on the top of the doors which then slide along a track on the head jamb. When the door is pulled open, it folds into two portions that protrude outwards. Bifold units are typically sent knocked down, meaning the jambs, track, and hardware are not assembled. A bypass unit has two doors with hangars attached to the top that slide on a track. When one door is slid, it overlaps the other. Bypass units are typically sent knocked down, meaning the jambs, track, and hardware are not assembled. Certain locations will create a pre-hung bypass unit; the doors with hardware attached are assembled with the jambs. The doors will be secured to one side so that they don’t shift during transit. Also known as a hidden unit, the pocket unit is built into the wall. The frame sits in the drywall which allows the door to slide into and out of it. When open, it doesn’t appear there is any door in the opening. Pocket unit frames are available knocked down, where the frame and hardware come in a box, or pre-assembled, where the frame is ready for installtion. A barn door unit consists of hardware that is mounted on the top of the door which slides along a track. The track extends past the opening, covering the adjacent wall and exposing the opening. 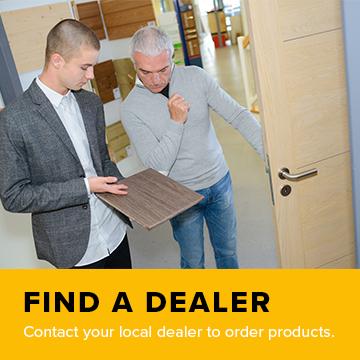